A/Prof Catherine Sinclair is a dual board certified, dual fellowship trained surgeon in laryngology and head & neck surgery. She completed her Bachelor of Medicine and Surgery with Honours at Flinders University, receiving the Dean’s prize for Medicine and the Staff prize for surgery and the AMA (SA) medal.

She went on to complete Basic Surgical Training in Victoria and was awarded the Gordon-Gordon Taylor Medal and the Clinical Committee Prize for Basic Surgical Training, before being accepted into Otolaryngology Head and Neck Surgery. She completed her Otolaryngology training in Melbourne in 2009, and travelled to New York to pursue two one year fellowships in Laryngology (New York Centre for Voice and Swallowing) and Head and Neck (Thyroid) Surgery (University of Alabama at Birmingham). During her laryngology fellowship she trained under Professor Andrew Blitzer and Professor Marshall Strome. At the  completion of her second fellowship, she was invited to remain in New York and, between 2010 and 2021, worked with the New York Center for Voice and Swallowing and Mount Sinai Health System, also serving as the Director of the Division of Head and Neck Surgery at Mount Sinai West Hospital and an Associate Professor with the Icahn School of Medicine at Mount Sinai.

During her time in New York, Catherine worked with voice professionals and performers from Broadway and the Lincoln Center. Her research into the laryngeal adductor reflex has gained her international renown, and in 2018 she won the prestigious American Laryngological Association young faculty award in 2018 for this work. She has published and lectured widely both within North America and internationally. In 2016, she led a team who developed a novel continuous laryngeal nerve monitoring technique for surgeries where the vocal nerves are at risk of injury. This technique is now being used worldwide to protect the laryngeal nerves from intraoperative injury.  She is a pioneer of non-surgical ablative options for thyroid nodules and lectures widely on topics related to thyroid disease and their management. She is the incoming Editor-In-Chief of VideoEndocrinology.

In Janurary 2021 she relocated to Australia. 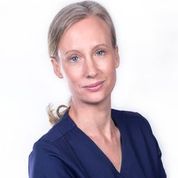