George is a Melbourne based General Surgeon who subspecialises in Upper GI, Hepatobiliary and Bariatric surgery. In addition to his subspecialty interests he performs all types of General Surgery and diagnostic and therapeutic endoscopies (Upper & Lower GI endoscopy and ERCP).

George completed his MBBS at The University of Melbourne in 2003 and the went on to complete his Surgical training(FRACS) at St Vincent’s Hospital in 2011. George undertook further specialist fellowships in Upper GI and Hepatobiliary surgery at St Vincent’s and then Box Hill Hospitals prior to completing two years of International Fellowships in Hepatobiliary Surgery in Nottingham and then in Laparoscopic Upper GI and Bariatric Surgery in Oxford, UK.

Languages spoken other than English: 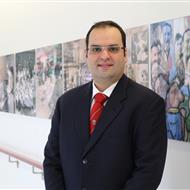