Sample questions are provided to assist candidates in preparing for the exam. The expectation is that candidates sitting for the OHNS SSE examination are adult learners and are able to synthesise information from a number of sources rather than rote learning from a limited number of texts.

A sample of each type of multiple choice question (MCQ) is provided with an example of the rationale used to write the questions and set the exam.

Rationale: The anatomy of the tonsil is considered important as tonsillectomy is a common procedure performed by Otolaryngology Head and Neck Surgery Trainees.

The correct answer is A. facial artery via the tonsillar branch providing the main arterial supply with smaller contributions from the lingual, ascending pharyngeal and ascending palatine vessels.

Rationale: Laryngeal physiology and anatomy are considered important core knowledge for assessment of the vocal folds and dysphonia by Otolaryngology Head and Neck Surgery Trainees.

S. The lamina propria of the normal vocal fold aids phonation because
R. it allows the underlying muscle to restrict vocal fold vibration

The correct answer is S is true, R is false. The answer is referenced from Bailey’s Otolaryngology Head and Neck Surgery 5th edition Chapter 61 page 874.

Normal laryngeal physiology describes the mucosa over the vocal fold as allowing vibration and phonation. The lamina propria serves as a shock absorber or impendance matcher, so that the epithelium can vibrate freely without restriction by the underlying muscle. This explains why S (statement) is true and R (reason) is false.

Example of a question on pathology involving common otolaryngology conditions seen by Trainees, which includes microbiology and inflammation.

With regards to the palatine tonsils
A. Infections can be due to Haemophilus influenzae
B. Infections are not usually caused by group A beta-hemolytic streptococcus
C. Infections can be complicated with development of rheumatic fever
D. Is usually mild in children and infants

The correct answers are
A. True.
B. False. Up to 30% of bacterial tonsillitis is attributed to group A beta- hemolytic streptococcus.
C. True. One of the potential complications of streptococcal tonsillitis is rheumatic fever and glomerulonephritis.
D. False. Particularly severe forms of pharyngitis and tonsillitis are seen in infants and children who have not developed any protective immunity to such agents.

Another example of a question regarding the physiology of hearing.

The correct answers are
A. False. Sensorineural hearing loss is more likely associated with loud noise exposure.
B. True. Pathology and physiology studies have shown that outer hair cell’s are most susceptible to damage from excessive noise exposure.
C. False. Otoacoustic emissions are cannot be evoked with acoustic stimuli when outer hair cells are structurally damaged.
D. False. Aminoglycoside’s are more likely associated with sensorineural hearing loss especially if excessive doses are used.

Below is a sample of a “spot question” and how this covers all three areas of study: anatomy, physiology and pathology. 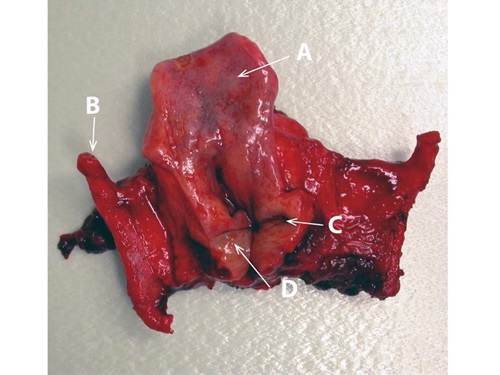 a. Name the structure indicated by the Arrow labelled ‘A’? (2 marks)

Answer: Epiglottis
This is an Anatomy question. Variations in spelling that cannot be interpreted as meaning something else are generally given full marks. For example, ‘epiglotis’ , ‘epiglotts’ would not be marked down. If spelling is very poor ie ‘epyglots’ half marks may be awarded. No marks would be given for ‘glottis’.

b. The infective process causing gross swelling of the structure indicated by the Arrow labelled ‘A’ is now rare due to childhood immunization. What is the classic causative organism that has been targeted by immunization? (2 marks)

c. What movement does the structure (transected at its posterior end) indicated by the Arrow labelled ‘D’ perform during the laryngeal phase of swallow? (2 marks)

Answer: Adduction
This is a Physiology question. Variations in spelling will not necessary be marked down ie’aduction’ If you wrote ‘adbuction’ this would score no marks as this could be ‘abduction’ which would be incorrect. If you answer “closes’, “moves to the centre’, half marks would be scored.

d. The movement, identified in Part ‘c’ of this question, occurs due to innervation by which nerve?

Answer: Left recurrent laryngeal nerve
This is an Anatomy question. In this case, if Left was not stated, you would still receive full marks as the question is asking about the movement of adduction of the vocal cords. If you wrote “RLN” this would receive no marks, as it is an acronym.

Back to Otolaryngology Head and Neck Surgery SSE in OHNS