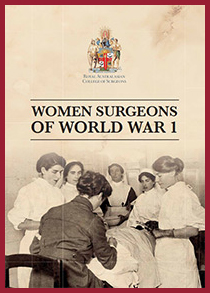 Focusing on four women surgeons who made their way to war. Agnes Bennett and Lilian Cooper worked for the Scottish Women's Hospitals near the Serbian front. Conditions were incredibly harsh but both women acquitted themselves well. They returned to successful careers in New Zealand and Australia respectively.

Lilian Cooper was also our first female FRACS. Feminist Phoebe Chapple went to France in 1917 and while attached to the Queen Mary's Auxiliary Army Corps, was one of a handful of women to win the Military Medal. Vera Scantlebury was 28 when she arrived at the Endell St Military Hospital in London. Her diaries (held by the University of Melbourne Archives) record the evolution of a young and inexperienced doctor to a competent surgeon. Vera Scantlebury (Brown) was later fêted for her pioneering work in infant welfare.