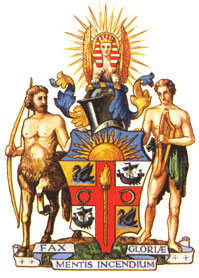 The coat-of-arms and the prefix 'Royal' were the joint work of (Sir) Alan Newton and (Sir) Hugh Devine, who harnessed British tradition to act as a counterweight to pervasive American influence in the formative years of the Australasian College. Devine petitioned the College of Arms and the design, begun in 1927, and was approved by them with the granting of the arms on 30 January 1931. Unfortunately, the process was too far advanced for the word 'Royal' to be included, for the petition requesting the royal prefix had not been sent to the King until late in 1930. Therefore the arms were granted to The College of Surgeons of Australasia.

There was some contention about the crest. In heraldic terms the 'crest' refers only to the device on top of the helmet. In the College's case, this is the figure of the Sphinx. Correctly, the device should face the same way as the helmet, and should therefore be seen in profile. The crest on the College's coat-of-arms faces outward, and despite objections from the Heralds, has remained that way. The Sphinx is also a conflation of the two ancient versions, the Greek (a woman's head and torso and eagle's wings on a lion's body) and the Egyptian (a male head with headdress on a lion's body). The reason for and meaning behind this conflation has been the cause of much speculation over the years.

The Grant of Arms, also called Letters Patent, is a manuscript document, written on parchment. In the top left corner is a full-colour drawing of the arms (the achievement). The text sets out the circumstances of Devine's petition, the authority of those granting it in pursuance of a warrant issued by the Duke of Norfolk, Earl Marshal of England, and an heraldic description (the blazon) of the achievement. It is signed by the three Kings of Arms (Garter, Clarenceux and Norroy), who have all affixed their seals to the lower edge.

The Grant had arrived in Melbourne by March 1931. It came in a wooden box, covered in red cloth decorated with gold tooling and bearing the monogram "GvR" (Georgius Quintus Rex). What was done with it at that time is not clear, but presumably it was hung in the College's rooms at 6 Collins Street, Melbourne. Sometime during or after WWII the Grant disappeared. On 1 November 1978 a replacement grant was issued over the seal of the College of Arms (Wyn Beasley in The Mantle of Surgery recounts an amusing tale of how The Royal Australasian College of Surgeons had to satisfy the College of Arms that it was the same entity as The College of Surgeons of Australasia). However, the original document subsequently reappeared, having languished for years in a bank vault, and it now hangs, framed and mounted, near the Council Room in Melbourne. The 1978 Grant was presented to the New Zealand branch in 1981-82, and now hangs in the Committee Room in Elliott House, Wellington.

For more information on the ways the College has incorporated the Arms into its buildings and furnishings, please see No end to the ways by A.W.Beasley, ANZ Journal of Surgery, Vol 47 (1), February 1977.

Back to Symbols of the College